The property market fundamentals of Australia’s biggest city council are as bent as a banana. While rates of population growth continue to ease, the high volumes of new housing supply are absurd, and the situation with Brisbane jobs is not as rosy as the state government are trying to portray.

Whilst Brisbane City Council (BCC) has the highest population out of all of Australia’s 550 local government authorities, its population growth rate has come down a long way from the dizzy heights which it consistently produced throughout the noughties decade. Its 2015 growth rate of 1.4 per cent is now back in line with the national average. In spite of the distinct easing in population growth (housing demand) the rates of new housing supply have gone in the other direction, scaling record levels.

Contrast this to the most recent three years, additional housing demand was 17,285 (based on population growth of 51,804) yet a staggering 47,977 new dwellings were approved. As shown in Chart 2, things are completely out of whack.

84 per cent of approvals over the last three years were for attached dwellings. Obscene! In 2014 and 2015, most property pundits repeatedly predicted that Brisbane’s property market would follow in the footsteps of Sydney and Melbourne; often referring to a ‘knock-on effect’ and Brisbane’s more affordable housing as their so-called ‘research’. Conversely, Propertyology downgraded its outlook for Brisbane in early 2014, instead forecasting that Brisbane was likely to see only modest price growth unless something significant occurred to help turnaround Queensland’s disappointing economic performance. Median property values subsequently increased in Brisbane by 4 per cent (2014) and 4.3 per cent (2015), well below Sydney (15.1 per cent and 15.1 per cent) and Melbourne (9.1 per cent and 12.7 per cent). On the surface, Greater-Brisbane’s unemployment rate of 4.9 per cent [June 2016] looks very favourable compared to national and state averages of 5.8 per cent and 6.3 per cent, respectively. But, here’s the thing: a decline in Brisbane’s unemployment rate from 7.4 per cent in February 2014 to the current 4.9 per cent is totally at odds with the lack of confidence demonstrated by Brisbane business owners. Where are all of these jobs that the Queensland state government continues to refer to in press release after press release since coming into office in January 2014?

A close examination of the detail behind the employment data clearly illustrates that the economic reality is different to the broad-brush unemployment rate. According to official ABS data, the 46,921 extra jobs created in Queensland during the period February 2014 to May 2016 represents 9.1 per cent of jobs of the 517,333 jobs created nationally. Given that Queensland represents 20.3 per cent of Australia’s total population I’d say that banana-benders have been batting well below their weight! Further analysis of individual industry sectors suggests that Queensland’s economic engine has actually seized up. Of the 46,921 extra jobs created, public administration, health and education have collectively increased by 51,622 over the period. One can’t help but scratch their head and question why, with a significantly smaller population than New South Wales and Victoria, that Queensland added more jobs in the Public Administration sector (8,838 additional taxpayer-funded government jobs) than any other state.

The 25,300 jobs lost in Queensland’s mining industry will include plenty of white collar jobs in Brisbane’s CBD where, according to Property Council of Australia, commercial office vacancy rates rose to 16.9 per cent in August 2016.

The most compelling statistic is the 22,167 jobs lost in Queensland’s retail sector; cash register activity is one of the most reliable measurements of a community’s economic pulse. Job numbers in the Retail Trade sector have increased in every Australian state except Queensland. New South Wales and Victoria’s impressive volume of jobs growth in retail trade reflects the confidence shown at auctions and open homes. On the other hand, property sales volumes in Brisbane City Council declined from an already modest level over the last twelve months (2.8 per cent fewer house sales and 17.2 per cent fewer apartments). 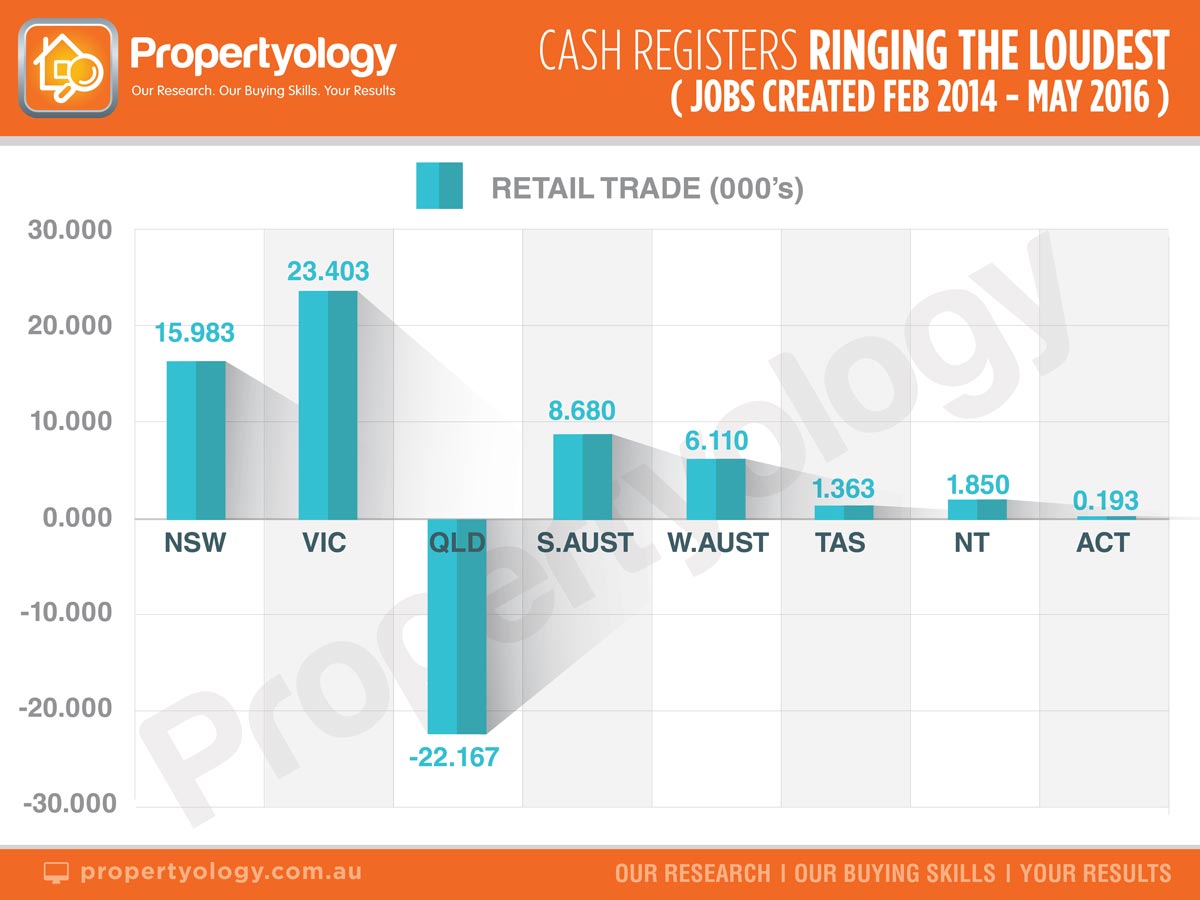 Yes, property is much more affordable in Brisbane than in Sydney and Melbourne. But, Queensland’s interstate migration trend is (again) falling and few people will relocate without being exceptionally confident of their employment prospects. The under-performing economy is why Brisbane’s property market hasn’t found its way out of first gear. And, the ridiculous volume of new housing supply may soon see that gear changed to neutral. Propertyology will continue to invest in locations across Australia where cash registers are ringing louder than Brisbane.

One Property, Two Incomes: What Are The Pitfalls?

September 18, 2014 - by Propertyology Head of Research and REIA Hall of Famer, Simon Pressley

What the changing banking landscape means to you