The capital of the Northern Territory might be the warmest city in the country, but its economy and property market are far from glowing.

In fact, Australia’s 17th largest city has recorded a median house price decline of 11.5 per cent in the past three years – and the outlook is grimmer still.

A sad state of affairs

Those of us who have been to Darwin appreciate it has a unique lifestyle. And, it is geographically placed perfectly to benefit from the Asian Century.

But what I find most frustrating about the parlous state of Darwin’s economy and property market is that it has so much to offer but it’s devoid of a bold vision and robust strategic plan.

The Top End is in a bloody mess and the sad thing is that national and Territory leaders appear to be doing very little about it. Businesses aren’t creating jobs, retail trade is flat, more residents are leaving than arriving, and tourists seem to have disappeared, too. One of the city’s major employers, AA Co’s Livingstone Beef abattoir, declared a $20 million loss last year, placing the jobs of 200 people at risk.

There doesn’t seem to be many job-creating projects in the pipeline or any plan to get the Northern Territory back on track.

In other smaller states like Tasmania and the ACT, there has been solid job growth over the past few years, but not so for the NT.

The poor employment picture doesn’t make sense when one considers that Darwin is one of our nation’s most extraordinary tourism locations.

Whereas the tourist sectors in locations like Tasmania, Canberra and many parts of regional Australia have performed strongly over recent years, the same cannot be said of Darwin.

Darwin and the broader region has some unique tourism experiences, but there has been insufficient investment in hotels and accommodation, packaged tour options, and tourism marketing over recent years.

The rise of Asia’s middle class means there is a world-wide tourism boom right now, but it appears not many are travelling to Darwin even though it’s right on their door-step. The trend in this chart doesn’t make a pretty picture! 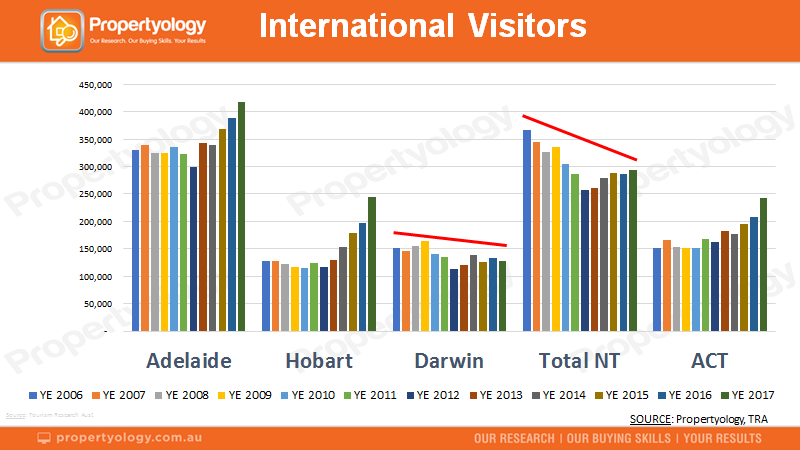 The poor economic indicators mean that Darwin’s population is dwindling while most other cities post strong growth of new residents from interstate and overseas.

Over the 2016/17 financial year, Greater-Darwin’s population grew by a pea-sized 691 people. Last year, the population increased by more in Albury (Australia’s 42nd largest city) than Darwin (our 17th largest).

3,263 former residents decided to up stumps and leave the Top End for another state last year.

I believe that there’s a very real chance that, when 2018 data is released in the new year, Darwin will create history as the first Australian capital city to see population decline. But is anyone listening? 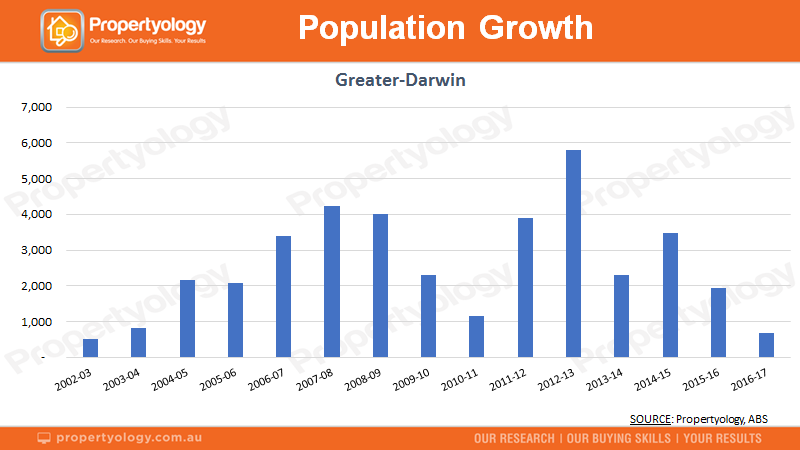 Boom to bust in 10 years

From 2002 through to 2012 inclusive, median houses produced double-digit growth in 9 out of 11 years, including 12.1 per cent growth as recently as 2012. No other capital city came close to Darwin’s strong performance during that extremely prosperous era in Darwin’s history.

Since then, though, things have been poor with prices continuing to head south in the Top End. A glimmer of some good news is that properties are selling quicker now than two years ago but, at the moment, it’s impossible to see when buyer activity will increase significantly to create pressure on prices again.

While Darwin will remain on Propertyology’s watch list, the investment fundamentals are far superior in several other Australian locations right now. From 2010 to 2015, while Darwin’s economy was still strong, an overzealous construction sector pumped out high volumes of new housing supply, with apartments especially a dime a dozen.

The volume of additional supply has decreased drastically since then, which has absorbed some of the excess stock, but it is a double-edged sword because it has also reduced much needed work within the construction sector. There are many reasons why I’m sad about the Darwin situation.

For one, it has so many top-shelf opportunities that it should be leveraging off.

What I’m talking about is its proximity to Asia, its unique tourism attractions, the critical role it plays for our national security, as well as its large reserves of gas and oil, bauxite reserves (aluminium) and beef.

One of Darwin’s biggest assets is its proximity to enormous reserves of gas – offshore and onshore. And, while that word “crisis” gets grossly overused in society these days, it’s utterly insane that Australia can’t supply affordable energy for our factories and households. There’s an obvious and very significant win-win solution that even Blind Freddy can see.

As much as Darwin needs serious Federal Government support, it also needs to help itself.

I believe there needs to be a detailed strategic plan that provides a clear road map on how the Top End can capitalise on its geographic advantage and its economic assets.

Until then, Darwin will continue to squander its plethora of opportunities.

Projects under way in the Top End:

May 15, 2020 - by Propertyology Head of Research and REIA Hall of Famer, Simon Pressley

November 20, 2018 - by Propertyology Head of Research and REIA Hall of Famer, Simon Pressley