Perth’s rental market has previously experienced the best growth in Australia. But, across the 5-years ending December 2017, Perth’s median rent for detached houses and apartments declined by 29.8 per cent and 32.2 per cent, respectively.

Analysis conducted by Propertyology looked at the historical trend of capital city rents between 1997 and 2017. Rental trends across this 20-year period were analysed in 5-year blocks.

There appears to be a direct correlation between wage growth and rental growth.

We keep hearing that wages haven’t grown much at all in Australia post-GFC and how that’s hurting households because cost of living has increased. Perth wage growth was lower over the 5-years ending 2017 than any other period over the last 20 years.

Unprecedented growth in investment lending over the 5 years ending December 2017 and the resultant extra supply of rental stock has also played a significant role in suppressing the growth in rental prices.

Mum-and-dad property investors play an important role in the supply of rental stock.

Right across Australia, rents barely moved over the last 5 years.

Over the entire 20-year period, Perth rents increased by 141 per cent. 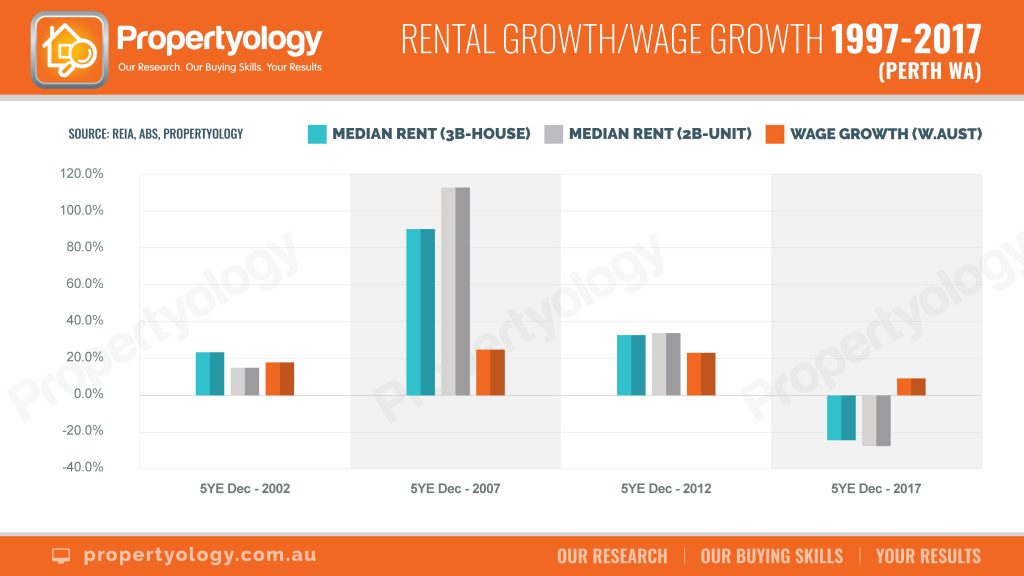 Perth rents and property values more than doubled during the 5YE 2007; wage growth was also strongest during this period. Strong investor activity during this period resulted in an increased rate of supply of rental stock however, it fell way short of demand in an era when WA’s economy and population growth was the strongest in Australia.

The collapse of commodity prices from late-2012 was a trigger for job losses across Western Australia. Wage growth for the 5YE 2017 was therefore significantly lower over this period. The weak state economy resulted in accelerated migration to interstate locations and a reduction in demand for rental accommodation during the 5YE 2017.

Perth has the lowest proportion of apartments of all eight capital cities (only 6.6 per cent of its 818,081 total dwellings as at Census 2016).

Perth has the highest capital city homeownership rate in Australia with only 26.7 per cent of its population living in rental accommodation in 2016.

Since 2017, residential vacancy rates in Perth have been progressively reducing from the 7 per cent peak however, they still remain above the 3 per cent equilibrium. Generally speaking, demand for rents to rise within a market doesn’t occur until vacancy rates reach the low 2 per cent range.

While the Perth economy does finally appear to have stabilised, Propertyology is anticipating a trough as opposed to a bounce. Accordingly, it is likely to be quite some time before we see pressure on rents.

Propertyology is a national property market researcher and buyer’s agency, helping everyday people to invest in strategically-chosen locations all over Australia. The multi-award-winning firm’s success includes being 2018 Buyer’s Agency of the Year in both the REIQ Awards For Excellence and Your Investment Property Awards. Propertyology was also a finalist in the 2017 Telstra Business Awards. Contact us here.

October 22, 2020 - by Propertyology Head of Research and REIA Hall of Famer, Simon Pressley

May 5, 2020 - by Propertyology Head of Research and REIA Hall of Famer, Simon Pressley