Australia’s population has grown by an average of 1.7% per annum over the last decade. This is one of the highest growth rates in the developed world, well above the World average of 1.1% per annum.

From year to year, Australia’s population typically grows by 200,000 to 400,000 people. The average annual population increase over the last 15 years is 305,000. According to the most recent population data (year ending March 2015), last year our population growth eased slightly to 316,000 people (1.4% growth and still a lot of extra demand for accommodation). Where Does The Growth Come From?

Modern science enables people living in the developed world to live longer. The life expectancy in Australia has already increased from 76 years old in 1980 to 82 years old in 2010. Life expectancy is forecast to be 90 years of age by the year 2044.

Australia has long been a multi-cultural country and overseas migration attributes to approximately 60% of total population growth, even higher between 2006 and 2009. 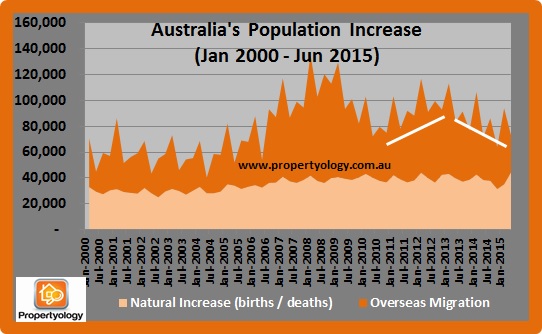 Over the last ten (10) years, the states which have experienced the highest rate of population growth are Western Australia (2.6%), Queensland (2.0%), and Northern Territory (2.0%). South Australia (77.3%) and Victoria (75.8%) also have a heavy population concentration within their capital cities.

The state of Queensland has 48.1% of its population in the state capital, Brisbane. In fact, Queensland is spoilt for riches with a total of ten (10) large regional centres that have individual populations of 60,000 or more.

Importantly, 7.8 million Australians elect to NOT live in capital cities. People make this choice because they may have grown up there, have family there, prefer quieter lifestyles with less congestion, more affordable cost of living (including housing), and employment opportunities. A majority of Australia’s regional towns and cities are more than 150 years old and have all of the essential infrastructure that big profile cities have.

It can be worth reminding ourselves from time to time that whether an individual chooses to live in Katherine, Kingston, or Kogarah is as subjective as whether they select T-bone, trout, or tofu from a restaurant menu. Where we choose to live and where the best potential for our investment is are two (2) completely different questions. Separate from fluctuations in Australia’s total population, some segments of the population relocate from state to state. Reasons for relocating include lifestyle choices, cost of living, and employment opportunities.

Understanding the trends within interstate migration is one of many useful tools for property investment.

As this first graph shows, NSW has always struggled to retain people. Fewer people migrated away from NSW in 2012 (property prices subsequently started to increase significantly). The initial trend appears to be starting again and the primary reason for this is a lack of housing affordability. 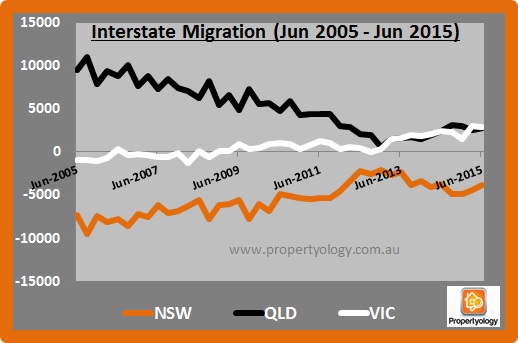 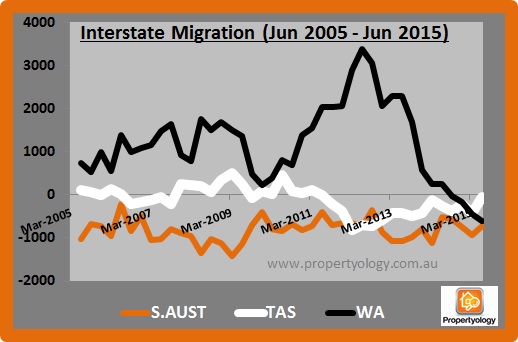 For several years, QLD attracted a high proportion of interstate migrants and it’s no coincidence that property price growth was strong within the state during last decade. More recently, interstate migration to QLD has eased (confidence levels haven’t been as high as they once were). The initial trend appears to be (slowly) returning again.

Since 2013, VIC has been the big-improver in its ability to attract interstate migration.

In addition to strong overseas migration, WA has traditionally been a big beneficiary of interstate migration. As this graph shows, there has been a sharp decline in interstate migration (iron ore job related) from 2013 onwards and this eventually became reflected in property prices.

Tasmania has experienced improvement in its interstate migration trend, indicative of its improved employment market and property market.

The average household age of a community is one of 40-odd factors that Propertyology takes in to account when selecting a town or city to invest in. To invest sustainably, it is important that a location has essential infrastructure so that it can retain its population. Beyond that, evidence suggests that the size of a population (big or small) does NOT play a major role in property price growth. Generally speaking, locations with a large population mass already have expensive housing so the potential for growth can be less than locations with smaller populations.

Consider this: the wage of police officers, school teachers, retail managers, mechanics, etc is probably much the same in a large capital city as most regional towns, yet the cost of (say) a 3-bedroom house can be significantly different.

Myth-buster #1: Population mass (total size) does not have a big influence on price growth.

According to official property data, of Australia’s eight (8) capital cities, over the last 15 years, Hobart experienced the smallest population growth rate however, its property price growth over the period was third best out of all of the capital cities. Sydney had the 6th highest population growth rate and experienced the smallest rate of growth of property prices over the last 15 years.

Over the last 15 years, 2008 produced Australia’s biggest increase in population (2.19%) however, that same year produced Australia’s fourth smallest increase in combined capital city house values (5.3%). The third biggest year for population growth (1.78% increase in 2012) resulted in a national DECLINE in property values of 0.5%. Conversely, the years where combined capital city house values increased the most (20.1% in 2003 and 17.9% in 2002) were actually the years which saw the second lowest increase in population (1.13% in each year). In other words, the population growth and property price growth do not align with each other.

The local government authority (LGA) of Wyndham, in outer-Melbourne, had a population growth rate over the last 10 years which was 4 times the national average and 3 times Greater-Melbourne. Ararat actually experienced a DECLINE in its population of 0.3% per year over the same period yet it achieved a whopping 0.5% more average annual price growth. It’s worth keeping in mind that, over the last 15 years, every location in Australia (capital city and region) experienced years of significant property price growth, years of poor performance, and many normal years.

A study of official data relating to Australian property market history revealed that LGAs with the biggest rates of population growth in each state did not necessarily experience the biggest growth in property values. In Victoria, Wyndham, Melton and Melbourne City all experienced phenomenal population growth (3-4 times national average) yet, in all cases, their property price growth was below the capital city average. Camden had one of the highest population growth rates in NSW (3.2% per annum) but it’s average annual price growth of 7.7% was quite a way under the 8.5% combined capital city average. In 2004, the population for the LGA of Narrabri, in northern NSW, was approximately 11,000 people and it remains the same in 2014. Narrabri’s average annual increase in property values of 8.1% for the 15 years ending December 2014 is actually better than the densely populated, highly desirable, Sydney beachside location of Bondi where the comparable change in property prices was a more subdued 7.7% per annum.

The South Australian LGA of York Peninsula had an average annual decline in population of 0.4% per annum but its median house price grew well above the combined capital city average at 9.5%.

When rental yields are factored in along with capital growth rates, many of these lesser-known regional towns performed far superior to big population bases such as capital cities. The evidence doesn’t lie! Myth-buster #2: Population growth rates do not have a big influence on price growth.

Conclusion: How Significant Are Population Trends?

There are three (3) broad factors which influence property values:
Supply
Demand
Sentiment
Each one of the above factors has 6-12 separate components which each takes on varying levels of significance in the overall property price change equation. Population is one component on the ‘Demand’ side of the equation. Historical data suggests that, over the longer-term, population mass and population growth rates don’t have as significant an impact on property price growth as most would have imagined.
In Propertyology’s professional opinion, factors which have a greater influence on property prices include: