It will not apply across the board and it will be a little while before we see the green-shoots poking through. But it will happen: Propertyology believes that Australia’s tourism industry will be the next sector to produce property investment riches. You’ve read it here first!

Australia’s strong economy and the best performing property markets over the past five years can be attributed to our powering mining industry. While we think mining will remain a main cog in Australia’s economic engine for decades to come it is our tourism industry which has been the focus of a lot of our research over recent months.

How Will Tourism Affect Property Markets?

Hardly a day goes by without us reading an article, a statistic, or a report of some kind which contains something about the enormity of the rise of Asia’s middle class. As a whopping 2.5 billion Asian people are progressively dragged out of poverty and in to middle class over the next 20 years there will be an enormous amount of extra cash getting splashed on goods and services. Asia is in the midst of urbanisation which has created unprecedented demand for ‘rocks and crops’ – the iron ore and coal to construct numerous new gigantic cities plus the agricultural products to support Asia’s new-found modern diet.

Dinosaurs, koalas, crocodiles, and casino chips will be Asia’s next interest in Australia. Tens of millions of Asian people each year are suddenly finding themselves no longer living in primitive villages and with a wallet full of more money than they had ever imagined. They want to see the world. And the numbers are already showing that Australia is high on their list of most desirable holiday destinations.

Australia is already the 8th largest international tourism market in the world. Despite the recent global downturn, most countries around the Asia-Pacific rim are experiencing strengthening economies augmented by rising income levels, especially in China, Malaysia, India and Indonesia. Australia’s proximity to these expanding Asian markets marks the beginning of a new era of tourism growth and investment opportunities. 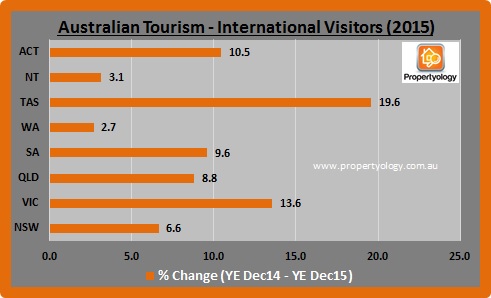 Data during the second half of 2012 on passenger arrivals shows that China has already overtaken the UK as our second highest number of tourists behind only New Zealand. And, we are only a couple of laps in to this Asian Century marathon.

The cha-chinging of our cash registers will create property investment opportunities. Billions of dollars spent each year by Asian tourists at resorts, hotels, restaurants, on souvenirs, golf courses, and other tourist attractions will filter through the economy of (quality) tourism locations. Businesses will flourish, more staff will be employed, and they, too, will spend more money. Those who may have previously left a tourism location in search of employment opportunities will return, and there will be plenty of work if they wish to bring their friends with them. Housing demand will be on the rise again. And, with good incomes and low interest rates people will have the capacity and confidence to buy, upgrade, and renovate. The property cycle begins again!

Slipping Under The Radar

According to the federal government’s Department of Resources, Energy & Tourism, Australia’s tourism industry directly employs 500,000 people, adds $35 billion to our GDP each year, and accounts for 8% of our total exports. Over 6 million international tourists will arrive in Australia during 2012/13. 51% will visit NSW, 35% Qld, and 32% Victoria. They will spend a lazy $102 billion. Why haven’t we heard more about this?

Official figures for 2011/12 show tourism spending up 5% (twice the rate of inflation) even though our tourism sector had to battle a high AUD$, the appetites of European and American tourists deflated by their own economies, cyclone Yasi, Queensland’s floods, and Japan’s tsunami. We dug deeper in to the detail and there it was again – a record 542,000 Chinese visited Australia (up 20% on the year before) and each person spent 15% more. The Tourism Forecasting Committee predicts one million Chinese visitors will arrive per year by 2020. Asia’s middle class is rising faster than Gina Rinehart’s bank balance.

Tourism Australia’s paper, ‘The China 2020 Strategy’, expects China’s spend on Australian tourism to more than double over the next 7 years. The Chinese have rated Australia as their number 1 tourist destination. The paper suggests that Australia needs to prepare for affluent Chinese couples, aged 30-49, to come here chasing our nature, laid back lifestyle, iconic landmarks, koalas and kangaroos. They also want quality. To tap in to the Chinese demand Australia needs to invest in airports, new and refurbished hotels, casinos and new theme parks.

James Packer and Clive Palmer will be the next BHP and Fortescue Metals of the tourism boom when it hits. Palmer talks about a dinosaur theme park, hovercrafts, and resort refurbishments because he understands the Asian Century. Ditto Packer with his lobbying for extra casino licenses.
We’ve extracted details of tourism-related projects in the pipeline from our array of research records and summarised the biggies below. Large tourism projects generally create thousands of construction jobs and ongoing employment. With this comes a long-term boost to local economies and creates demand for housing.

Far North Qld – The Qld government has negotiated the commencement of direct flights by Chinese Airlines to Cairns. The government has also funded a $2 million promotional package to assist Cairns’ tourism industry and the desired affect is already being felt. In November last year, the state government also approved a $1.4 billion resort, golf course, retail village, and residential community at Ella Bay. The project will create 400 jobs over a 15 year construction phase.

Sunshine Coast – Clive Palmer has proposed a $2.5 billion upgrade of his resort at Coolum, including a new airport, beachfront hotel, casino, retail, dinosaur theme park, monorail and more. The project will create 9000 construction jobs, as well as increasing the number of employees at the resort to 2500. Palmer might know how to attract controversy however he didn’t win his $billions in a chook raffle.

Gold Coast – Jewel Hotel & Resort is a $1 billion approved project for a 6-Star Surfers Paradise luxury hotel. This project is set to create 2500 jobs during construction and 700 ongoing jobs, over the next 20 years. A new cruise ship terminal, cultural precinct and another casino is also proposed for the Coast and it is estimated it would add $750m into the Gold Coast economy each year plus create a further 10,700 jobs. Gold Coast Mayor, Tait, appears to be quite a mover and shaker and is pushing ahead with plans to deliver the cruise ship terminal by 2015 with the support of Premier Newman. Promotions associated with 2018 Commonwealth Games will also boost tourism and create up to 30,000 jobs.

Rockhampton– Tower Holdings has recently received Qld state government approval to build a $600 million resort on Great Keppel Island in a couple of stages over 12 years. This will be the first resort project for the Great Barrier Reef in 20 years. Subject to the federal government granting environmental approval construction will start early 2014 with the resort opening mid-2015.

Brisbane – one of the first initiatives proposed by the Queensland LNP government when they took office in March 2012 was the development of a large site opposite Southbank. They have already approved a $1 billion new building to centralise and streamline public service operations however the bigger-picture plan includes a possible new casino, restaurants, and high-end retail strip along similar lines as Melbourne’s Crown Casino precinct.

Perth – several large urban renewal projects approved, mostly around its CBD. James Packer is investing a further $1.4 billion to expand Western Australia’s only casino plus build an adjoining 6-star hotel by 2016. A $3 billion redevelopment in the Riverside precinct on the eastern front of the Swan River, $2.6 billion for the Watermark project, and a new world-class stadium at Burswood will replace the WACA once completed.

Sydney – the $6 billion redevelopment of Sydney’s waterfront Barangaroo site is likely to contain a new 6-star hotel and casino costing $1.3 billion, also being pushed by James Packer’s Crown Casinos. There will also be a $1.5 billion overhaul of the convention centre at Darling Harbour.

Caution To The DIY Property Investor

Tourism locations deliver one of the biggest sucker-punches imaginable to the DIY property investor. People confuse the emotion which they feel when away relaxing on a holiday with property market fundamentals. If it were true that a sea change or tree change was an instant recipe for property market success then why have locations that offer these features and benefits been amongst the worst performers over recent years? It’s not like the beach and trees were just placed there.

In isolation, talk of a project going ahead is not sufficient justification for investing in a property in such a location. Propertyology also considers it important that locations have industries other than just tourism which supports the economy.
Every location and every industry have risks. Specific to tourism, some obvious risks include exchange rate risks, health risks (remember the Sars virus?), national security risks (refer ‘September 2011’), and risks associated with airlines (high oil prices, labour strikes).