Tens of thousands of Australians are prepared to move cities in their hunt for affordable housing, according to Propertyology’s analysis of the latest population data.

The Great Australian Dream is alive and well with the latest data proving that people are prepared to uproot and move to make that dream a reality.

Sydney’s strong population growth was mainly due to overseas migration however, some local residents were opting for more affordable city regions.

There’s a pull towards Sydney’s more affordable areas like Camden and Liverpool. On the other hand, there appears to be a push away from locations that are attracting the highest proportion of overseas migration (areas like Canterbury-Bankstown, Cumberland, Parramatta and Georges River).

There continues to be a lot of hype about Greater-Sydney’s 101,754 population increase in 2016/17. In isolation, one might be forgiven for associating strong population growth with popularity. Breaking the data apart suggests otherwise: 83 per cent of Sydney’s total population growth (84,684 people) was from overseas migration while a further 17,943 people migrated away from Sydney last year to another Australian location.

Melbourne’s biggest gains from interstate migration were Casey (6,051), Wyndham (5,255) and Melton (3,844). These are outer-suburbs where affordable houses are readily available for families. Australia’s second most expensive city has a median house price sitting at $828,000.


The locations with the biggest gains are outer-suburbs where affordable houses are readily available for families. Conversely, Monash (which had the largest population loss to internal migration) is one of Melbourne’s more expensive pockets. Propertyology’s suspicion is that migration away from Brimbank and Dandenong is related to car manufacturing job losses last year. 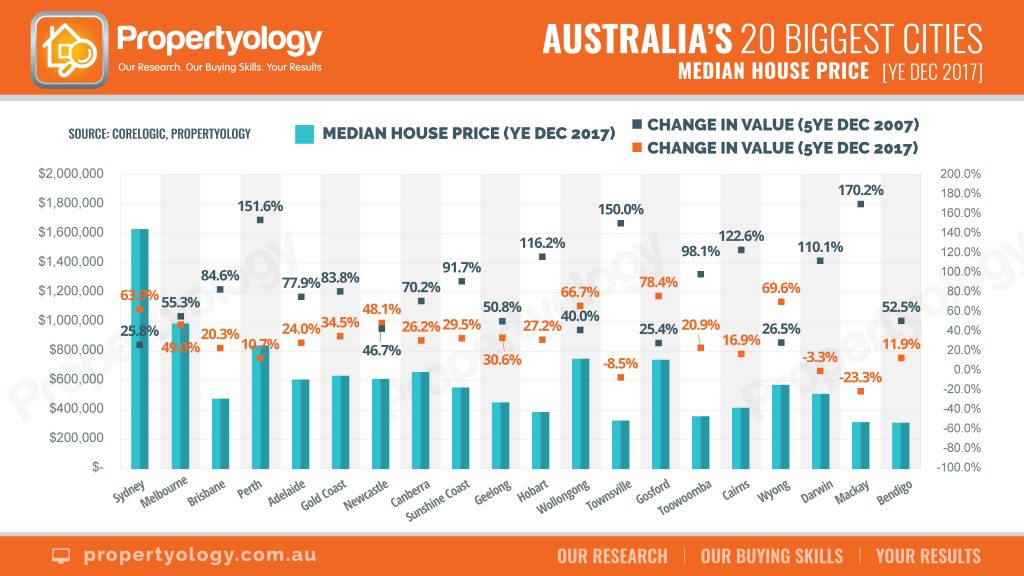 Greater Brisbane is made up of only five city councils, all of which were beneficiaries of positive internal migration last year. The biggest gains from interstate migration were Moreton Bay (5,110), Ipswich (3,223), and Redland (1,237).


Interestingly, Brisbane City Council (officially Australia’s largest council) was the smallest beneficiary with only 846 people from the 17,426 total interstate migration to Queensland.

52 per cent of Queensland’s population reside outside of the state’s capital.

9 out of the 30 city councils which make up Greater-Perth actually saw overall population decline last year.


Several years ago, Perth used to be one of Australia’s most expensive cities but the soft property market has improved housing affordability; this is a factor in the decision-making of many interstate migrants. While Greater-Adelaide’s total population increased by 8,623 over the year, 6,115 existing residents migrated away.

Of the 18 city councils which make up Greater-Adelaide, only 3 produced a positive figure for internal migration last year; one of those (Walkerville) was for only 9 people.


Propertyology is a Brisbane-based buyer’s agency and (national) property market research firm. As the only company in Australia to correctly forecast Hobart’s resurgence before its current boom, Propertyology help everyday people to invest in strategically-chosen locations all over Australia. The multi-award-winning firm’s success includes 2018 winner of Buyers Agency of the Year in REIQ Awards For Excellence and being a finalist in the 2017 Telstra Business Awards. To find out how we can help you invest, contact us on 1300 65 40 70 or email here.

November 14, 2019 - by Propertyology Head of Research and REIA Hall of Famer, Simon Pressley

April 9, 2015 - by Propertyology Head of Research and REIA Hall of Famer, Simon Pressley