How two young investors are kicking goals in regional locations

How two young investors are kicking goals in regional locations

There was about 3,000 people who lived there and not many of them talked about property investment, he recalls.

Like so many young people from there, Dan made the move to Canberra when he was 18, where he studied teaching and played AFL. It was a move that would herald big changes in his life.

Not only did he meet Jess, who is now his fiancé, but his older housemate was an investor. The problem was he didn’t understand how he could ever afford to be one, too.

“I was living in a share house at the time and I never really considered it. I knew I’d buy a house some day because that was what everyone does.”

As fortune would have it, his housemate talked to him about using equity to grow a portfolio, which piqued his interest even further.

Dan and Jess, now 27 and 26 respectively, decided to a buy home but, like so many other first-timers, didn’t really do any research on location or asset selection.

“At the time, we bought because we could afford it. We didn’t do any research. It’s a unit in the inner-south of Canberra that we purchased in 2017,” Dan says.

“Since then, I started educating myself more, and it’s probably one that I shouldn’t have bought. In saying that, it’s been fine, and it’s tenanted at the moment.”

Not long after, though, Dan got offered an opportunity to work for an AFL club in Sydney in player welfare and development.

However, as recipients of a first home owners grant and not past the mandatory owner-occupier period, Jess couldn’t make the move with him. It meant several months of long drives back and forth from Sydney to Canberra for Dan.

“My role is helping players get prepared for everything off field. Obviously, they’re dedicated to their on-field endeavours, but we also make sure they’ve got a Plan B if footy doesn’t turn out the way they want it to,” Dan says.

“It’s good now having education myself about property. There are some horror stories of footy players being approached by people with shiny new brochures to go and invest in property development. It’s good to have people like us who can suggest they go and talk to someone to get advice.”

Many people might not know that Propertyology’s Head of Research, Simon Pressley, is a huge AFL fan. In fact, he is a massive Brisbane Lions fanatic!

It’s fair to say there was a synergy when Dan first met Simon. Dan was also aware of Propertyology’s success in uncovering Hobart’s investment potential before the current boom kicked in to gear.

“I met with a couple of buyer’s agents, but Propertyology were the most impressive. Simon being a footy fan as well also went down very well,” Dan laughed.

Dan had heard about Propertyology by listening to podcasts while driving between Sydney and Canberra and reached out to the firm to find out more.

Together with Jess, they had decided to use experts for their next purchase. Their decision was influenced by some major issues that they experienced with the settlement of their Canberra property and they vowed to never again tackle something so important as buying a property on their own.

Dan also understood they would make any fees back quickly because of Propertyology’s superior expertise when it came to market research and asset selection.

“There are people that do this every day. I’m not going to find a good property by just looking online,” Dan says.

After the initial meeting, it became clear the couple had met the right team to help them.

Dan’s regional location upbringing also meant that, unlike so many people that grow up living in a big capital city, he already had an open mind to investing anywhere that had good fundamentals. He also related to Propertyology’s methodology which includes, among other considerations, investing in locations where the typical house is very affordable.

“Other buyer’s agents just focus on buying in their home city and attempt to get you to buy in particular suburbs or price ranges within that city,” he says.

“Propertyology was so professional. They strategically select locations all over Australia. We were so blown away by the level of service that we got.”

After getting comfortable with Propertyology’s research methodology and business processes, Dan and Jess were happy to receive any property recommendations. They had established trust.

After a couple of weeks, Bryan Loughnan [Propertyology Head of Acquisitions] found them the right property, on the right street, at the right price. They bought a 3-bedroom house in a major regional growth area for only $259,000 – a discount of some $20,000 from the listing price.

“We made our money back overnight, which was very impressive,” he said.

The low maintenance house is in a central part of town and situated on a block with views overlooking the ocean. It’s hard to imagine that such a cracker of a property could be purchased for only $259,000. 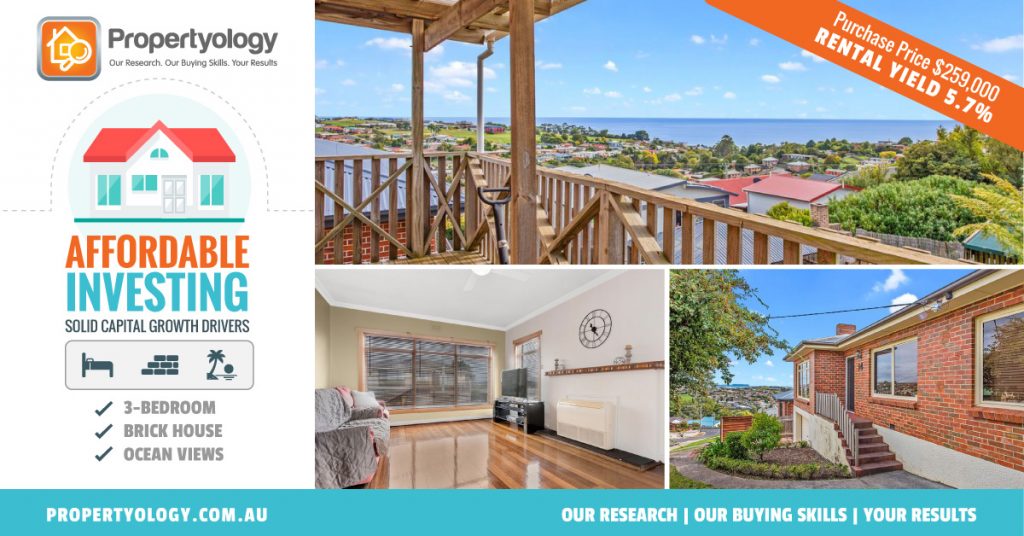 When the tenant shifted out, the first open home attracted five applications and the new lease is for $285 per week in rent. That 5.7 per cent yield means that the property already pays for itself.

The local economy of this exciting regional city is very diverse. Propertyology’s research uncovered growth drivers within a number of key industry sectors plus infrastructure projects such as a new university and hospital upgrade.

Dan and Jess’s portfolio had gone from one to two in a short period of time only this time the buying experience was far different than their first.

“It was like chalk and cheese. The way that they communicated with our mortgage broker and solicitor, we just couldn’t speak highly enough of the level of the service,” he says.

“Jess said she has never come across someone so professional and well organised.”

With time on their side, the couple plan to keep growing their portfolio in the years ahead. They are cognisant that their lives are likely to change quite a bit with a wedding on the horizon.

Dan says they plan to add to their portfolio again in 2019 and will definitely utilise the services of the Propertyology team.

“It’s about the long-term for us. I don’t have a plan to retire at 40 or anything like that. It will be nice to keep doing the things that we like doing,” he said.

“I actually think that if we hadn’t used Propertyology, we’d probably just be sitting on one property – and that would be it.”