Its population is growing at a faster rate than Sydney and Melbourne. Combine this with the fact that housing is incredibly affordable plus the general positivity surrounding South East Queensland, and it’s easy to see why Ipswich often pops up on property hotspot lists.

Ipswich is a location that an increasing number of property investors are asking Propertyology’s buyers agents about so I thought I’d dig in to Propertyology’s library of market intelligence and dissect the pros and cons for investing in Ipswich real estate.

With a population of 207,000 people, The Swich is one of Australia’s largest city councils and one of five municipalities that make up Greater-Brisbane. Playing the role of a satellite city on the western outskirts of the State’s metropolis, Ipswich has similarities to Geelong (VIC) and Central Coast (NSW). Ipswich’s population is also similar in size to Hobart (TAS).

The property markets of each of those three ‘sister cities’ have been among Australia’s best-performed over recent years, so it seems an appropriate exercise to compare their various metrics to Ipswich.

The 3.2 per cent population growth rate in Ipswich during 2017 was double the national average. It was higher than Melbourne’s 2.6 per cent and streets ahead of Sydney and Brisbane’s 2 per cent.

Year after year, Ipswich’s population increases by more than 5,000 people. That’s significant ongoing demand for more shelter and batting well above its weight compared to sister cities in other states.

A good chunk of Ipswich’s population growth comes from internal migration. According to the latest data from ABS, a whopping 3,223 existing Aussie residents relocated from another part of the country to Ipswich during 2016-17. It’s one thing to attract population, but the rate of new supply to house the increased demand is another thing. The current downturn in Sydney and Melbourne should serve as an important lesson of how an overzealous construction industry acts as a growth suppressant on property prices.

Those of us who have digested the South East Queensland Regional Plan (SEQRP) understand that Ipswich has been assigned the important task of accommodating an above-average portion of SE Queensland’s future population growth.

Given the abundance of available land and how affordable housing is, it’s entirely understandable why 89.5 per cent of Ipswich’s 73,000 residential dwellings are detached houses (the national average is 72.9 per cent).

If you’re a resident of Ipswich, you’ll be saying ‘why buy a dwelling that’s attached to other baggage when I can have a detached house and a backyard for a similarly affordable price.’

Unfortunately, logic and common sense hasn’t stopped various promoters of new property encouraging people to invest in duplexes. While the thought of two incomes from one property might sound appealing, resale demand will always be significantly curtailed given this dwelling type has very small demand from local owner-occupiers (70 per cent of the buyer pool).

Anyone who’s been in the game for a long time will know that attached dwellings (duplexes, townhouses and apartments) have significantly less potential for capital growth in Ipswich than well-chosen detached houses. Beware of the ‘…later on, just knock the dividing wall out and convert it to a conventional house…’ spiel. With an abundance of land available for development, the local construction sector has consistently managed to release more than enough new supply ahead of the demand curve.

There’s no reason why this ease of bringing new supply on to the market in Ipswich won’t continue for decades to come. This has also been one key reason why Ipswich’s property market has under-performed in comparison to other south-east Queensland municipalities over the last decade.

The workforce in Ipswich consists of 92,600 people as at the last Census.

The service centre for Brisbane’s outer-western suburbs, Ipswich is predominantly a blue-collar demographic. Manufacturing is the largest sector by employment volume (14.4 per cent of its workforce, compared to the national average of 9.9 per cent).

Arts and Recreation (includes sport) is its next biggest sector, while retail trade and education are also big employers.

Ipswich’s Public Administration and Safety sector encompasses the RAAF base at Amberley. As with the entire state of Queensland, Ipswich’s economy hasn’t set the world on fire at any time post-GFC.

The below chart illustrates Ipswich’s change in median house price compared to job creation volumes over the last nineteen calendar years. It’s clear that Ipswich’s recent employment history is checkered with stops and starts, but it’s yet to really get going. In fact, ABS data suggests the 2018 calendar year produced a net loss of jobs. Propertyology is aware of a few manufacturing businesses that are among the casualties. 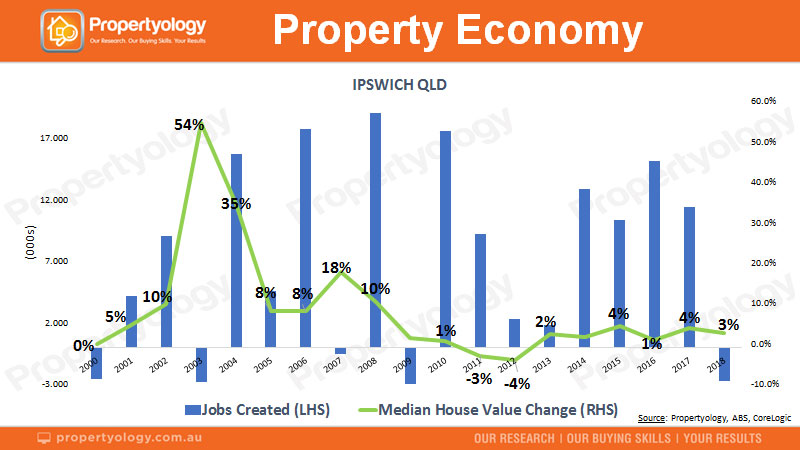 As shown in the chart below, the job trend line post-2015 has been steep in Hobart and Geelong while Ipswich has been quite flat.

Five years ago, it was a series of initiatives relating to the economy of Hobart and Geelong that Propertyology identified as property market growth drivers. Subsequently, real estate prices in those two cities have grown by between 40 and 50 per cent over the last four years, creating a nice nest egg for property investors. This aforementioned infrastructure investment is great for the community however, all of that construction was completed several years ago and any resultant direct impact on Ipswich’s property market is well past us.

As with every town and city, there’s a series of future job creation initiatives with some of the more prominent including:

Ipswich’s susceptibility to flooding and the recent controversy surrounding corruption within the Ipswich City Council certainly doesn’t help Ipswich’s economic cause. With the city council being placed in Administration, there is no one sitting in the driver’s seat, let alone a real vision and plan for how to get there.

The volume of properties sold in Ipswich during the 2018 calendar year was 23 per cent lower than the previous 12 months. It’s also taking longer for properties to sell. 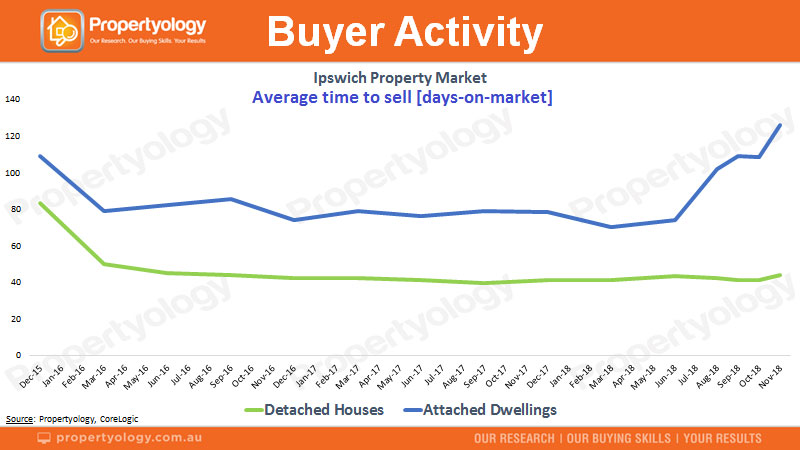 Related article: How to create a diversified property portfolio

Arguably more than any other location in Australia, plenty of people have made predictions of Ipswich having a property boom over the years.

On the flip side, I remain unconvinced about Ipswich’s ability to generate the volume of job creation required to generate any meaningful pressure on the labour market.

There is nothing which fills me with confidence that buyer sentiment will increase sufficiently to drive property prices significantly higher. Also, housing supply is likely to always be ahead of demand.

One could do worse than investing in Ipswich however, my overall rating of the Ipswich property market is a middle-of-the road performer for the feasible future. There are many other locations across Australia that fill our buyers agents with more confidence.

Propertyology is Australia’s premier property market analyst and a multiple award-winning buyer’s agency. Every capital city, every non-capital city, we analyse fundamentals in every market, every day. We use this valuable research to help everyday Aussies to invest in strategically-chosen locations (literally) all over Australia. Like to know more? Contact us here.

February 10, 2022 - by Propertyology Head of Research and REIA Hall of Famer, Simon Pressley

August 26, 2015 - by Propertyology Head of Research and REIA Hall of Famer, Simon Pressley

Winning Against The Tide