Why Australia does not have a housing affordability crisis

Why Australia does not have a housing affordability crisis

There is no housing affordability crisis in Australia because the majority of localities remain affordable to property buyers, according to new research by Propertyology.

The research found that 56% of local government areas in Australia had median house prices of $400,000 or below and 69% had medians of $600,000 or less, including several parts of Melbourne.

And, for the more affordable apartment option, a median price of $600,000 is accessible in 93% of Australia.

“Propertyology analysis of the 560 local government areas across the country proves that there is still plenty of affordable housing out there,” he said. 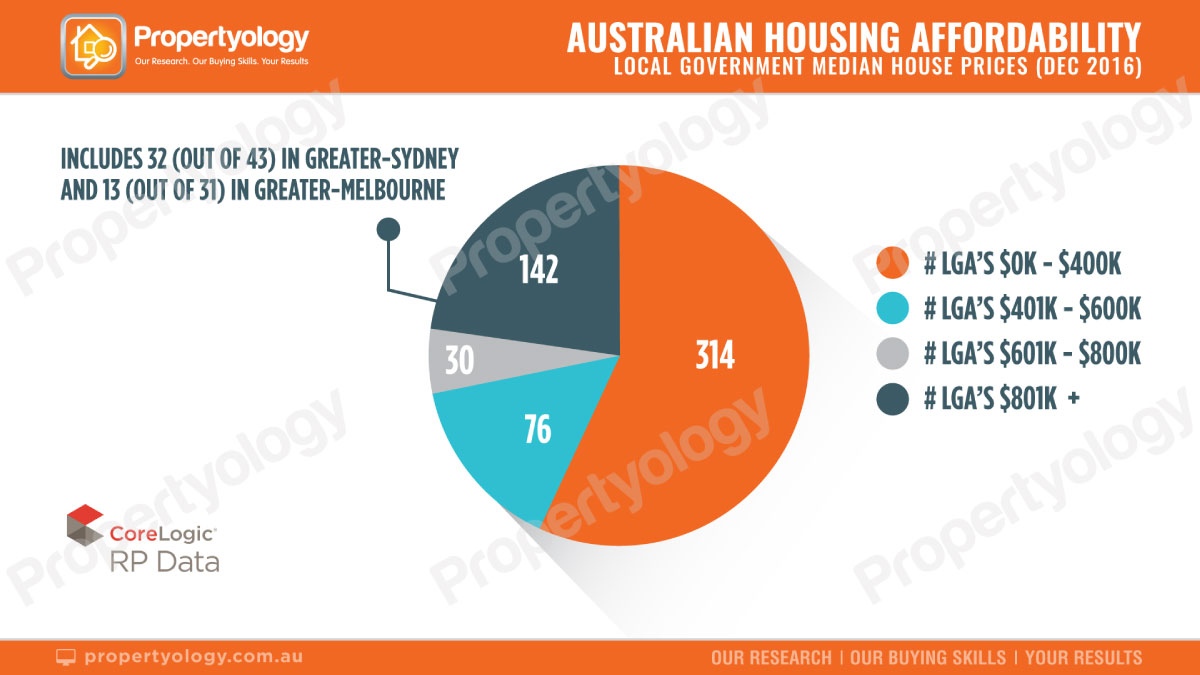 “Let’s be honest; the housing affordability ‘crisis’ is Sydney-centric, where only 3 of its 43 council areas have a median house price of less than $600,000.”

While it is certainly difficult for low-to-middle income earners to buy a house in Sydney, Pressley said a potential solution could be to purchase an apartment instead or to buy in a more affordable location elsewhere.

He said Propertyology buys affordable properties under $500,000 in locations over Australia every day, which included houses for $350,000 to $400,000 in capitals such as Brisbane and Hobart as well as in vibrant regional cities with thriving economies.

“The cost of housing is not going to reduce, and any government or industry body who says they have a plan to miraculously make this happen is lying. Falling property prices benefits no one. The best plan is to educate people about the very viable options which are readily available to them if their motivation is strong enough”, Pressley said.

“There’s no law which says one must remain living in Sydney. In fact, for generations, people have moved cities for work promotions or transfers, while many others have elected to do it for lifestyle and affordability reasons.”

“For those who aren’t attracted to relocating, we’ve observed a trend where more and more Australians are electing to become a rentvester – where they invest in affordable locations with better potential and continue renting where they want to live.”

Based on Propertyology research, a couple with an annual household income of $110,000* could afford to buy a median-priced house in 390 of 560, or 69%, council areas across the country.

Propertyology’s research shows that even in Melbourne, Australia’s second most expensive city, detached houses can be purchased in several outer suburbs for circa $450,000. Out of Greater-Melbourne’s 31 local councils, the median price is below $600,000 in 26 of those for apartments and 9 of those for houses.
Pressley said even a household income of $70,000 could afford to buy in 314 of all local government areas in Australia.

Pressley said lesser-known regional cities such as Dubbo ($355,000), Orange ($350,000), and Toowoomba ($370,000) were extremely underrated when it came to lifestyle, quality infrastructure and jobs, with unemployment rates actually below the national average. He said wannabe property owners striving to “afford” to buy in Sydney should be careful what they wish for.

“While we encourage all Australians to work on getting a foothold in the property market, does one really want to saddle themselves to an $800,000 mortgage for a $1 million property at the top of the growth cycle and interest rates likely to trend north?”

– Marketing campaigns which promote the wonderful attractions of living in lower profile regional cities. Plenty of Sydney or Melbourne residents have an image in their head of “regional Australia”, which includes dusty mines, a remote farm area with no amenities, and no jobs. Their perception is not the reality – we know because we are buying property in some of these locations.

– Decentralisation of some government departments (and head offices of big companies) to more affordable regional cities.

– Encourage household mobility by scrapping stamp duty on all properties (new and established) for anyone who is relocating from an expensive city to a more affordable city.

– Spreading a bigger slice of Australia’s investment in new infrastructure towards regional cities.
Incentives for baby boomers to relocate from an expensive city to a more affordable city.

Propertyology is a national property market researcher as well as buyers agency. Simon Pressley is also a three-time winner of the REIA and REIQ Buyers Agent of the Year award.

July 23, 2020 - by Propertyology Head of Research and REIA Hall of Famer, Simon Pressley

November 25, 2019 - by Propertyology Head of Research and REIA Hall of Famer, Simon Pressley

They All Sh!t The Bed