We’ve all heard the story about the property market rollercoaster of that small town which either booms or busts depending upon the size of the workforce at the local mine.

Truth be known, most cities (capitals and regions) have a key industry sector at the core of its economy. It’s the industry that the city has built its reputation on. That industry is a major employer that other industries also depend upon to provide goods and services.

Depending upon the fortunes of that key industry from time to time, we could describe it as either the backbone or the Achilles heel of its local economy.

While each location’s property market will always be influenced by a series of factors, the expansion or retraction within that key industry often has the most influence when comparing its property market performance with other cities.

From tourism, to mining, financial services, and exports, this report illustrates how ONE key industry has influenced the property market performance of a variety of different cities in different years.

Because there are various other factors at play, it often requires a swing in conditions for that key industry to occur over a sustained period of time (a couple of years) in order for any significant change to its property market to be observed.

The Mayor of Brisbane once told me that, for every person with a high-viz vest working on a mine in central Queensland there are nine other people in suits working for that mine in Brisbane’s CBD.

When the coal price has a sustained strong run, the rate of population growth in Queensland accelerates. As this chart shows, there often is a correlation with Brisbane’s median house price. Since the arrival of the First Fleet in Botany Bay, the cost of housing in Sydney relative to the rest of Australia has always been incredibly expensive. Affordability has always been a general Achilles heel for Sydney with Australian history containing several periods of affordability pressures, including right now.

In an economic sense, no industry is more important to Sydney’s economy than Finance & Insurance.

According to Census 2016, the financial and insurance services sector employs 384,608 out of the 10,683,842 people that make up our national working population. While 20 per cent of Australia’s total population reside in Sydney, for every 10 jobs in finance and insurance nationally 4 of those are in Greater-Sydney (145,782 people, or 37.9 per cent of the industry).

Tens of thousands of retail jobs in Sydney’s CBD depend on those white-collar jobs.

Sydney’s strength would become its Achilles heel if a major bank or insurance company collapsed or if global financial markets were challenged by stock market crashes and monetary supply.

Instability in the financial services sector combined with rising interest rates is a particularly toxic combination for Sydney. The foundation of Australia’s youngest capital city (established 1911), was based on the need to settle political conflict surrounding whether Melbourne (then Australia’s largest and wealthiest city) or Sydney (Australia’s oldest city) was more deserving of being Australia’s official capital. Situated centrally to both cities, land which was originally used for sheep grazing was selected as a new headquarters for federal parliament.

While Canberra has evolved significantly over those last 100 years, one thing that hasn’t changed is the incredibly high proportion of government jobs. Approximately 7 per cent of all jobs across Australia are with a government employee. But Canberra’s workforce of 221,200 people in June 2017 consisted of 100,000 government roles. 75,000 of these were with the federal government.

Australia’s equivalent of Washington, Canberra is the site of Parliament House, the High Court, and numerous government departments and agencies. The Australian Army’s personnel are trained at the Royal Military College, Duntroon, while the Australian Defence Force Academy is also located in Canberra.

Canberra’s economy is arguably one of the least diversified in Australia. While such a high proportion of government roles are the backbone for the city, the Achilles heel is vulnerable to government budget pressures and risks associated with decentralising various departments. The world will always need steel; Western Australia has a higher reserve of the steel-making commodity, iron ore, than anywhere else in the world. When the global environment for iron ore is positive, the Perth economy is often roaring. 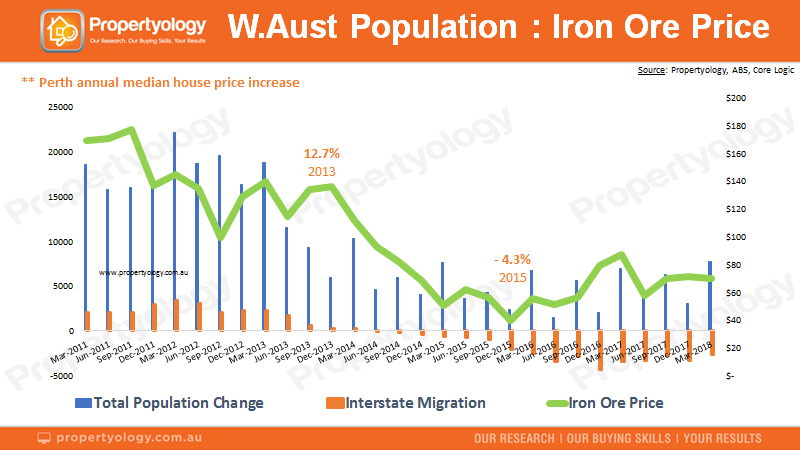 Tasmania is home to a wide range of (premium) agriculture products, plantation forestry, and various mining commodities. Due to the fact that it produces higher quantities than what its own resident population requires and the high quality of those products, Tasmania is a pro export state.

While historical property data going all the way back to 1970 suggests no periods of property price crashes, there is a link between the strength of the Aussie dollar and Tasmania’s population growth rate. Various offshore basins containing large reserves of gas has seen Darwin become the base for a couple of the largest gas plants in the world. During the construction phase of these multi-billion dollar projects, large volumes of skilled workers on attractive salaries took up residency in Darwin, thereby placing significant extra demand on local housing.

The Darwin LNG project was constructed between 2003 to 2006 and had a peak workforce of 2,000 people. Already supported by a strong local economy at the time, the influx of people played a big role in 8 consecutive years of double-digit property price growth between 2002 and 2009.

Constructed from 2012 to 2018, the US$36 billion Ichthys LNG project is one of the most expensive projects of any kind in Australian history. For much of the 6-year construction period, Darwin’s general economy was weak and, while the project employed an even bigger 8,000 people at its peak, many lived in a custom-built worker’s village. Noosa is the classic tourism market wherein the local economy is incredibly reliant on the tourism sector. When the Australian (and international) public feel secure in their employment and confidence is generally high, spending on discretionary items such as holidays is high. This increased demand for hotel accommodation and services such as cafes and general retail results in growth in Retail Trade jobs

But the considerable whack to consumer confidence from the late-2008 GFC onset took its toll on tourism, creating an inflamed Achilles heel for property markets like Noosa. Property prices took a battering, particularly the luxury end and housing stock that primarily serviced the holiday market. It took 6.5 years for Noosa’s median house price to return to $550,000.

A world-wide tourism boom kicked off circa 2012. As the chart below shows, growth in retail trade jobs subsequently improved while Noosa has been Queensland’s strongest property market over the last few years. In a former life as a credit officer, I remember assessing loan applications from borrowers who were earning ridiculously high incomes while working in Mount Isa. I marvelled at people in their mid-20s who already had accumulated a tidy sum of equity in property and were looking to borrow for another investment property.

Situated between Townsville (900 kilometres west) and Tennant Creek (660 kilometres east), Mount Isa is the base for one of the most productive mineral deposits in the world. The large reserves of copper, silver, lead, zinc and gold provide the backbone to the city’s economy.

A sustained period of decline in the value of commodities such as copper and silver resulted in a reduction in local mining jobs and falling demand for local goods and services. Property prices fell by 30 per cent over the 3 years ending December 2017.

The median house price today is $250,000. Interestingly, it would appear that precious metal commodities are now in the midst of another price growth cycle. Blue-collar trade skills are in Melbourne’s DNA. A whopping 24 per cent of Australia’s manufacturing workforce are in Greater-Melbourne.

Fortunately for Melbourne, other industry sectors such as education, tourism and health expanded significantly at a time when the car manufacturing sector came to a close in October 2017.

Melbourne’s median house price increased by 50 per cent over the last 5 calendar years however, property prices commenced a decline cycle in December 2017.

Common risks that the manufacturing sector might face from time to time include labour disputes and industrial action, rising costs of materials and electricity, maritime threats, currency risks (exporting), and the ability to compete with offshore cheaper labour.

The Sum Of All

February 1, 2022 - by Propertyology Head of Research and REIA Hall of Famer, Simon Pressley

Double-digit price growth: When & Where